Barcelona predicted line up vs Cadiz!

What will be the Barcelona predicted line up for their clash against Cadiz?

Barcelona Predicted Line Up vs Cadiz

Barcelona Predicted Line up vs Cadiz

In goal, we can expect ter Stegen to be there. In defence, we can expect to see Sergino Dest at right-back, Alba at left-back. Gerard Pique is back and will be partnering Clement Lenglet in defence.

A three-man midfield with Frenkie De Jong and Sergio Busquets can be expected at the base. Pedri will be on the attacking front.

In the wings, we can expect Dembele again on the right and Antoine Griezmann on the left while Lionel Messi plays down the centre following the departure of Luis Suarez. 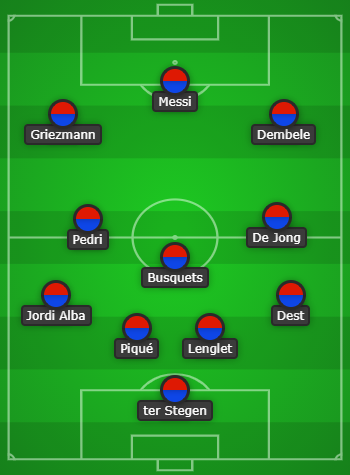 Ronald Araujo suffered an ankle injury in the match against Real Betis and will probably be out for a month.

The squad will be without key players Ansu Fati, Sergio Roberto and Philippe Coutinho who is out for three months with a knee injury.

Gerard Pique has returned to first-team training following his knee ligament injury he endured back in November.

Messi, Ousmane Dembele and Antoine Griezmann are expected to retain their usual positions.

Barcelona recently got thrashed 4-1 by PSG in the round-of-16 fixture of the Champions League and will be looking to bounce back stronger in this domestic tie.

We can expect a tired showing since both sides are struggling through injury concerns and back-to-back games. This means the same players could reappear from the last games, fatigued. Here we will give you an answer to the most frequently asked question about Barcelona – Cadiz.

Barcelona are facing several injuries, with important players like Coutinho and Ansu Fati out for the long term. This could affect their ability to win matches. However, beating Cadiz won’t be much of an issue.

Barcelona vs Cadiz Form: Barcelona predicted line up vs Cadiz

Barcelona faces Cadiz at Estadio Nuevo Mirandilla on Thursday evening. Both teams need the win for different reasons, with Barca looking to fight their way for the La Liga title.

Ronald Koeman’s side are third in the table and just three points behind champions Real Madrid.

Newly promoted Cadiz’s recent form has been disastrous, losing four of their last five matches in all competitions.