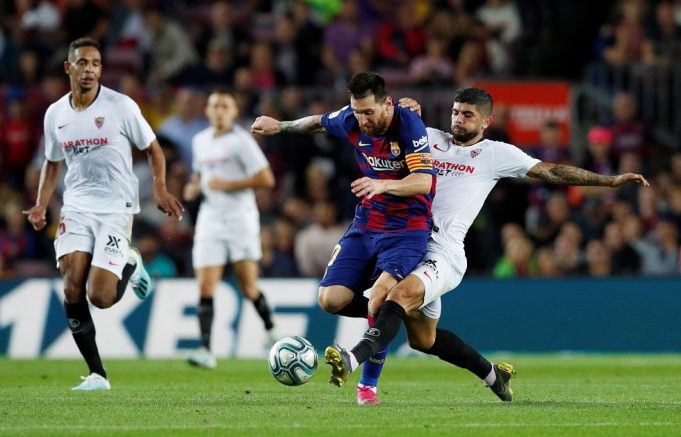 Our Barcelona vs Sevilla prediction and betting tips

We expect a Barcelona win at 3.75 with Unibet. Below you can read the reasons for our Barcelona vs Sevilla betting tips prediction.

We expect Lionel Messi to score first at 3.35 with Unibet

Here are a few Barcelona vs Sevilla free bets and special offers from the betting companies:

The Barcelona squad are the favourites for this tie at 1.90 with Unibet. Sevilla are priced at 3.75 with Unibet to squeeze out a win on their home turf.

Given the position of the two teams, it is not hard to see why Barca are prized so high. The fixture is very closely tied for a reason. Quique Setien’s men have been perfect ever since football resumed, but so has been Sevilla. Julian Loptegui has set up a very strong Sevilla side who, unfortunately, lost 1-0 against Levante on Sunday. That odds are tilted against them but only by a slim margin at 3.75 with Unibet.

Speaking of quality, this will be an opportunity for Lionel Messi to stretch his lead in the top scorer’s list which is why he has been handed odds of 3.35 with Unibet to score the first goal.

Barcelona face Sevilla at Ramon Sanchez Pizjuan on Friday evening. Both teams need the win for different reasons, with Barca looking to extend their lead over Real Madrid in the La Liga standings.

The Blaugrana will face their first tough battle after the restart on Friday. They have won both of their last 2 games convincingly as expected but a weak defence line could really leave them vulnerable for this tie.

It was an unsual loss against Levante last weekend for Sevilla, ending their eight-game undefeated streak. They are expected to bring the fight to Barca for this tie.

Friday’s match will be the 55th meeting between Sevilla and Barcelona. Barca have won 36 games while Sevilla have managed 9 wins for themselves and the other 9 ended as draws.

Quique Setien might have a tough time setting up his defence for this match. Gerard Pique picked up a knock in the 4-0 win over Leganes and Samuel Umtiti has been suspended due to gathering 5 yellow cards. That leaves Barca with just two options at centre-back – Clement Lenglet and Ronald Araujo, a rare pairing.

Otherwise, only Ousmane Dembele remains ruled out with injury. Martin Braithwaite could win back his starting spot to ease Luis Suarez’s recovery. Antoine Griezmann could also reappear as the team’s striker with Lionel Messi beside him.

As for the hosts, Julen Lopetegui has a lot to feel confident about. Injury-wise, Sevilla are in the best shape ever which leaves the coach with plenty of options to tinker with in attack.

Suso and Oliver Torres are pushing for starts but Fernando is likely to win one after being benched for the last fixture. Munir El Haddadi won’t miss the chance to play against his former side. Lucas Ocampos has been Sevilla’s standout player this season with 13 goals and is the natural selection at right flank.

Ferdinand: I was close to joining Barcelona

Rakitic: I am not a sack of potatoes

Why Did Barcelona Hire A Social Media Company?