Vidal is alleged to have been underpaid.

As a result, he could move back to Serie A.

Arturo Vidal has accused Barcelona of being “unfair” amid claims he is owed up to €2.4 million in unpaid bonuses. According to Spanish newspaper ABC, Vidal has filed a complaint against his club to La Liga and the Spanish Footballers’ Association. It is alleged that the Chile international has only been paid €1.7m of the €4.1m he is owed.

“I am not in charge of that, that is why I have my agent, my lawyer, who takes care of the awards and stuff,” he told Chilean radio station ADN. “It seems unfair to me if money is missing, but it is an issue that is alien to what we are experiencing today.”

Vidal has started just four La Liga games for Barcelona this term and earlier this week refused to rule out a move in the upcoming transfer window.  However, the former Juventus and Bayern Munich star is not thinking about his future while back in his native Chile for a short Christmas break: “It is a subject I said when I arrived here that I will talk about it when I am there [in Spain]. I am on holiday and I just want to talk about what is going on here.”

The Chilean is expected to leave the club for Serie A in the upcoming January transfer window with multiple reports linking him with Antonio Conte’s Inter Milan. However, it seems that Juventus have reportedly contacted Vidal for a possible move as well. According to Sky Italia, although the Nerazzurri still believe they can complete the deal for Chilean midfielder and are in talks with Barcelona regarding the same, Juventus have contacted Vidal as well and might play spoilsport for their Italian rivals. 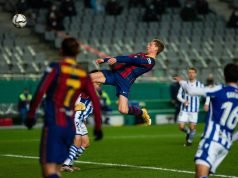 Setien Sees Himself As Barcelona Boss Next Season As Well