At a price of $17 million, Perez has been sold to Roma and this amount includes all variable and no buy-back clause.

“I know I am leaving a great club like Barcelona, but I’m joining another great club in Rome. I’m really happy and I can’t wait to start training alongside my new teammates,” Perez has already said.

Chief executive Guido Fienga added: “We are hugely satisfied with Carles’ arrival in Rome. Carles learned his trade in one of the best youth academies in Europe, and has been playing for a club with so much talent at its disposal.

“We are all hopeful that he can immediately have a significant role to play within our squad.”

“It was a shared decision. What I talked with him about was very clear. In the decisions made by the club, I gave my opinion. That’s it. Carles Pérez knows what I told him and also he is aware of the opinion of the club.”

When asked if anyone else would be leaving the Catalan club, Setien had an answer.

“Any more departures? I can’t guarantee anything. We’ll see, these are decisions the club takes but I think it’s clear that nobody leaves if they don’t want to leave.” 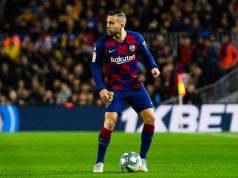