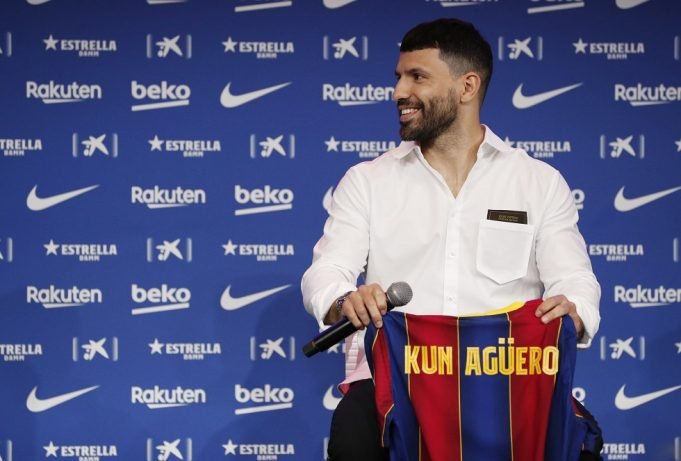 Sergio Aguero got officially unveiled as the new Barcelona player on Monday.

The Argentine headed over from Manchester City after seeing out the Champions League season.

His transfer did not cost Barcelona a single penny due to his expiring contract. The prolific goalscorer instead, got a lucrative deal to play for Barcelona across two seasons. Ronald Koeman has demanded a proper number nine to be signed and now, he has got one.

Aguero’s track record is impeccable in his playing career. From tearing up La Liga across five seasons for Atletico Madrid to become a record goalscorer for Manchester City in the Premier League – he has done it all.

President, Joan Laporta said, “The signing of ‘Kun’ Agüero is because he is a desired player and an exceptional player. Because of his quality and the way he plays in our system, he will go well.

“The signing of ‘Kun’ Agüero is for ‘Kun’ Agüero, because we want a very competitive team. It is the first of a series of signings that you will get to know. Naturally, we want Messi to continue.”

Aguero hopes to play alongside Lionel Messi next season, his compatriot and close friend. The former said, “Of course I hope to play with Messi. What happens with Leo is a decision that he and the club will make. It is a pride to play with him. I’ve played with him in the national team. If he stays here, which I think he will, we will try to give our best for the club.

“I’ve spoken with Messi, I speak with him every day. But I can’t tell you what we talk about. The last message was that he congratulated me, but we continued to talk about other things, which I can’t share.”

Messi: Football will never be the same