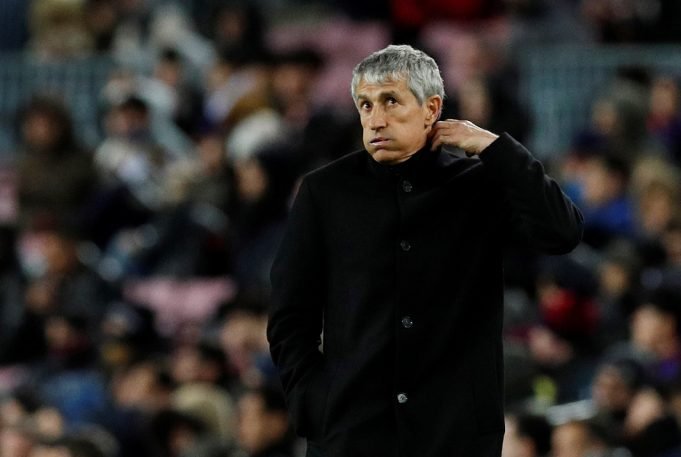 On Tuesday, UEFA fined Barcelona 15.000 Euros, for appearing late on the pitch, on their first leg of the last 16 match against Napoli.

The fine for the Barça team amounts to 15,000 euros as a result of the delay in appearing on the pitch. A fine that the club must pay within a period of 90 days.

But according to the Spanish newspaper Sport, there are more things to look out for. Especially the one where the disciplinary body blames coach Quique Setien for this delay, They give him a warning, a step prior to being sanctioned with a suspension, for “being the most responsible for the delay” when the team appears on the pitch.

The resolution states that the club must assure UEFA that the Barça coach is informed of this situation. In the future, should something similar happen again, Setién would automatically be penalized with at least one match.

However, without a doubt the hardest sanction, is for the team from Naples, which has been sanctioned with 12,000 euros for the use of laser pointers to which another 15,000 are added also for leaving the pitch late. A total of 27,000 euros that must also be paid in the next 90 days.

Gattuso also receives a notice for this conduct as Quique Setien with the same procedure as that established for the coach of FC Barcelona.

SEE ALSO: Xavi Will Sign These Two Players If He Becomes Barca Boss

Antoine Griezmann ‘A Caricature Of Himself’ At Barcelona