The Barcelona defender earned a call-up to the Uruguayan international squad despite undergoing a thigh surgery back in September.

The Catalan giants fear that Uruguay are attempting to force the 23-year-old defender back to the squad due to his importance to the national side.

He was left out of Uruguay’s World Cup opener against South Korea on Thursday and Uruguayan Football Federation vice-president Gaston Tealdi insists the defender won’t be rushed back.

According to reports, Barcelona would go to FIFA if they feel the defender’s fitness is being put in danger.

“The intention is to work slowly, gradually, giving security to Araujo and also to Barca. The moment Araujo is fit to be able to compete, the corresponding decisions will be made.” 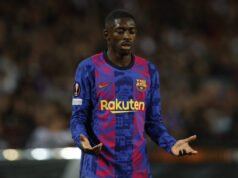 Summer signing Sergio Aguero reveals he refused the No.10 shirt