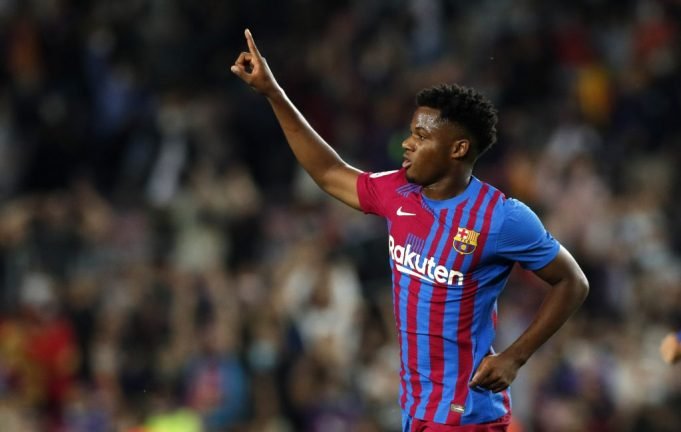 Ansu Fati netted a winner for Barcelona against Dynamo Kiev in a Champions League fixture on Tuesday evening. Catalan giants needed a victory in Ukraine to boost their chances for the next stage of the European Championship. The 19-year-old broke the deadlock for Barca and helped them to secure vital three points.

The first half ended without seeing any goal. The Spanish youngster got cross from Oscar Mingueza and the 19-year-old lashed an effort into the roof of the net.

Fati then dedicated this goal to his teammate, Sergio Aguero who has been ruled out of the season for the next three months. The Argentina international had to come off in Barca’s game against Alaves with breathing problems.

Former City star was later diagnosed with heart arrhythmia. Fati showed he was thinking of him as he did the Aguero’s signature celebration.

Barcelona now have picked up six points from their four games and they can make it through the next round if they defeat the Portuguese side at home this month.

Liverpool told to bring back Philippe Coutinho to Anfield

Luis Suarez Net Worth: How Much Is He Worth?